Hey friends! It’s been hard to find time to post here, but before I jump ahead and show you all the cool stuff I’ve done to the RV so far, I figured I’d introduce it in all of its gag-inducing early 90’s glory and tell you how I won it by the hair of my chinny chin chin on an eBay auction! This is basically going to be a photo dump and quick story.

A lot of the interior has already changed (though I’ve slowed down due to hurting myself by trying to be superwoman when helping my parents move) but these are the original photos from the auction I got it from.

Here she is! (Interior gallery below) 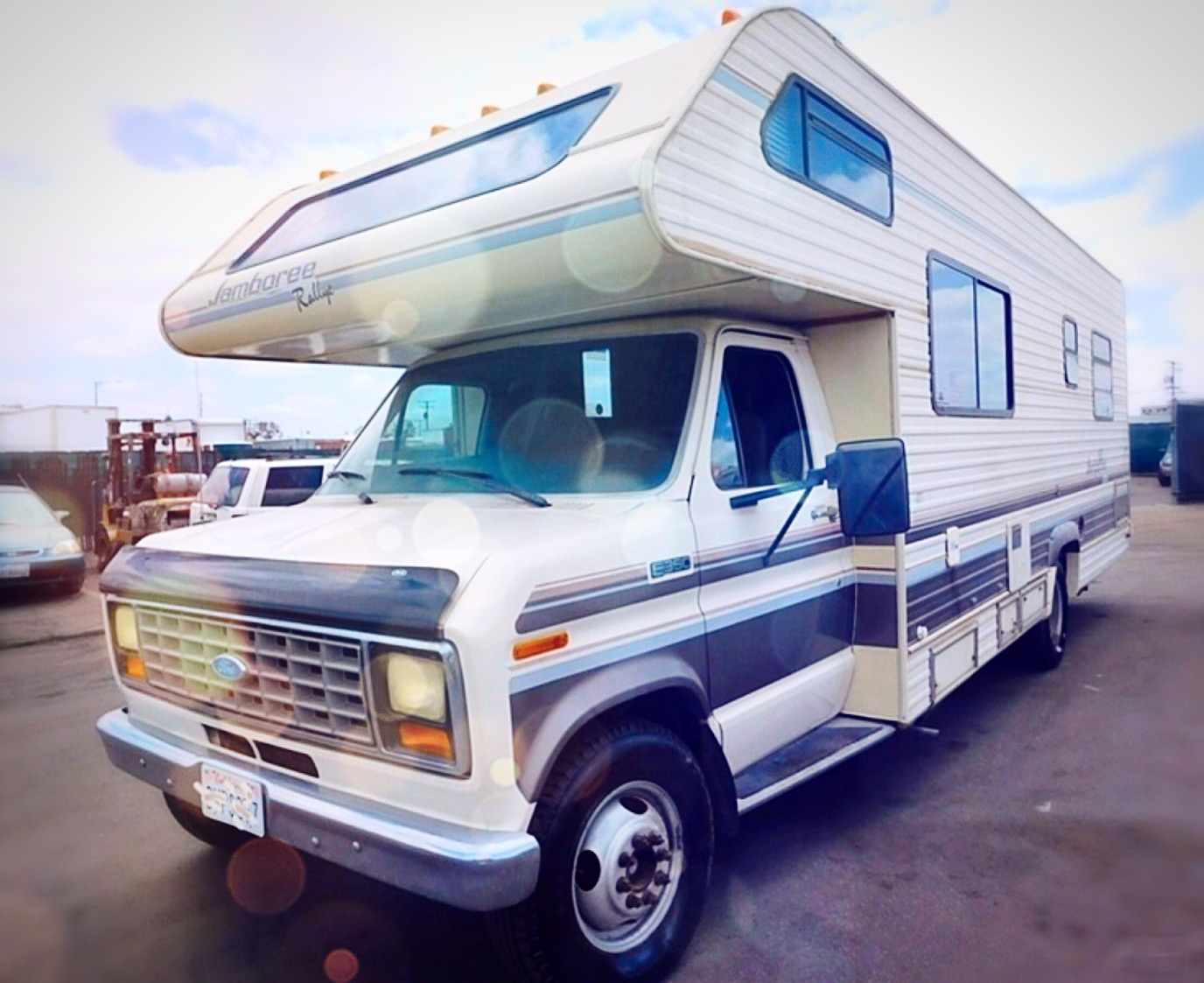 How I Found it & Bought It

Once I knew I wanted to try fulltiming in an RV and had settled on a Class C RV, I started searching on Craigslist in Los Angeles, Phoenix, and Seattle. I set up filtered searches on RVTrader.com, would scour http://rvs.oodle.com/used-rvs/for-sale/, and was just generally looking at every single listing I could get my hands on that had under 100k miles. Over about a week or so, I found a few potential picks and called 3 people within 2 hours of LA.. but by the time I got to them, they had each sold their motorhome already.

I started to think the RV life might actually be out of my budget as everyone was jumping on the affordable RVs before I could, but then I found http://www.motorhomefinds.com/ which seemed to aggregate all of the BEST deals by location.

I found my RV through Motorhome Finds on eBay (!!!) and was pretty worried about the idea of buying a VEHICLE to LIVE IN from a freakin’ eBay auction.

Thankfully the RV was only an hour away in Anaheim, which meant I could look at it first. So I waited and watched the listing for a few days until the day the auction was ending. The RV was still at $3500 in the morning. I thought, there MUST be something wrong with it. But I drove down to Anaheim to check it out before the eBay auction ended at 3.

When I got there, I couldn’t believe how great the RV looked for its eBay price. Of course, I had done my research and knew some of what to look for in an old motorhome.. namely water damage related issues and it looked great to me. Mechanically, though, I’m clueless, so I called around to find a mobile mechanic to come check it out, and he said it was the best condition RV he’s ever seen at that age. He said the water pump (or air pump? I don’t remember :D) needed replacing, but that was no big deal. Everything else looked great and it had even already had a hefty piece of maintenance that these models are known for requiring already done, according to a sticker he found under the hood.

That pretty much sealed the deal for me, since after all of my other research and scouring, I knew I’d be paying 9-12k for the exact same type of RV with a private dealer and with 4x the mileage. Literally. Other Class C Rv’s from the 90s on Craislist were much more expensive and much closer to 100k than 25k miles.

Essentially, even if I had to sink some $ in to get it into top condition, it was super unlikely I’d find another motorhome in this condition for this price with this mileage and the exact layout I wanted. So I went and bought lunch and sat in my car waiting for the auction to wind down.

Everyone else had the same idea as me: to start bidding at the absolute last second on the auction to win the RV at the lowest price possible. I had already mentally set a max price I’d be willing to pay for it, and knew I had the upperhand since I was the only one to check it out in person (I think), so I put 4999 as my bid with about 1-2 minutes left in the auction to see what everyone else was doing. I probably would have pushed it to 6-7 if I had to.

I could tell multiple people started bidding like crazy because although I was still the top bidder, my price kept going up and up.

With about 10 seconds left in the auction, the price was still under 5k so I figured I was pretty safe, but thought to myself.. what if someone else has the same idea as me? Or outbids me at 5000? So with literally seconds to spare, I upped my bid by 2 dollars to 5001. Well, I was right… And that’s how I won the auction! I won it by one freaking dollar!!!

Why Was It At An Auction?

I’m not sure it would be possible to find another RV like this at an auction. Why?

One thing I haven’t mentioned is this RV was not street legal when I bought it. The last registration sticker on it was from 2009. That means if I so much as parked it on the street, it would be immediately towed.

For the previous owner, that means they owed a lot of money for unpaid registration fees and fines.

Because of this, they also would have had a really tough time selling it in a private sale. Then, they or the new owner would have been responsible for both the back fees & fines AND ~10% in taxes from a sale. I’m guessing they either didn’t want to deal with it and couldn’t afford it at the time, or they died and their family members also didn’t want to deal with it/couldn’t afford it.

There is only one way to get out of this: DONATE IT! 🙂 So that’s exactly what they did. The company I bought it from is technically a charity (though not a very good one, but I won’t get into that) so neither the previous owner or the new owner (ME :D) were responsible for the old fines.

I about had a heart attack with the way the DMV attendant presented it to me, though, providing me a piece of paper with the WHOLE NUMBER (over $1k) on it before telling me the portion I owed, which was only the sales tax and one year of registration.

The moral of the story is, don’t get behind on your vehicle’s registration because if hard times hit, you won’t even be able to sell it if you can’t afford the fees you’ve racked up!

That’s it for now folks. Check back soon to see what I’ve done to the RV so far and what is coming up!

Why I Bought an RV

The Maiden Voyage (And Maiden Breakdown): Los Angeles to Seattle